First, let’s recap a typical data science workflow: every project starts by splitting our data into train, development (dev), and test partitions. Then we fit our model using the train and dev sets and compute the score using a held-out test set.

Most of the time, we shuffle our data before splitting, creating random splits. For some benchmark datasets like MNIST or OntoNotes 5.0, these partitions are already included in the task, providing us with standard splits.

However, it turns out that random and standard splits can lead to test sets that are not wholly representative of the actual domain (Gorman and Bedrick, 2019, and Søgaard et. al., 2021). It’s also possible that the training and test sets look very similar, encouraging the model to memorize the training set without actually learning anything (Goldman et al., 2022). This behavior results in overestimated performances that don’t translate well into production.

It turns out that random and standard splits can lead to test sets that are not wholly representative of the actual domain…resulting into overestimated performance that don’t translate well into production.

We will discuss the following splitting methods:

I want to take this opportunity to introduce a Python package that I’m currently working on, ⚔️ vs-split. It’s still a work-in-progress, but it implements some techniques I’ll mention throughout the post.

A central assumption in machine learning is that the training and test sets are from the same distribution, i.e., they are independent and identically distributed (i.i.d.) (Gilmer, 2020). But let’s drop that for a moment. We know that the i.i.d. assumption can lead to grossly overestimated model performances, but what if we evaluate the model with the “worst” possible test set?

We can obtain the “worst” test set by ensuring that the train and test sets have different distributions, i.e., they’re wholly divergent. In literature, this mode of splitting is called adversarial splits. We can measure this value using a metric called the Wasserstein distance. However, finding the right combination of train and test examples that maximizes this metric is an NP-hard problem, so Sogaaard et al. (2021) used an approximate approach involving k-nearest neighbors with a ball-tree algorithm.

If we run this method through the three datasets above, we can observe a short drop in test performance (measured by the Precision / Recall / F-score, lower values are highlighted):

Below you’ll find the displaCy output from ConLL 2003’s adversarial test split. I admit that I cherry-picked some of these examples, but one apparent pattern I saw is the presence of numbers (currencies, dates, scores) in the adversarial test set. One possible explanation is that the k-nearest neighbors search uses token counts as its feature, dividing the dataset based on token frequency.

This section will discuss how we can split datasets using various heuristics such as a document’s length or morphological features. Unlike the previous approach, where we treat the splitting process as an optimization problem, “splitting by heuristic” takes advantage of domain-expertise to create an alternative test set.

For example, document length can be a valuable feature to gauge how well a machine learning model adapts to cross-sentence information in NER. Longer sentences can provide more context as to what type of entity a particular token is.

In the example above, we know that the token McKinley can refer to either a location (LOC) or a person (PER). Because of the context sentence, “…was named after William McKinley”, the model had a better idea of what type of entity the second instance of McKinley is. The works of Luoma and Pyysalo (2020), Arora et al. (2021), and Siegelmann and Sontag (1992) explores how well NER models can take advantage of such cross-sentence information.

In our case, we’ll split the dataset so that the longer sentences are in the test split. Similar to Sogaard et al’s (2021) approach, we choose a threshold so that \(10\%\) of the documents will be found in the test set. After training a transition-based NER on this new split, the results are as follows (lower values are highlighted):

It’s interesting why there’s not much change in the WNUT17 score. We can even say that the split improved the performance! I hypothesize that the token-length difference between the training and test is not that apparent given the distribution. This means that the split may not be as biased as we want it to be and just looks like a random split. 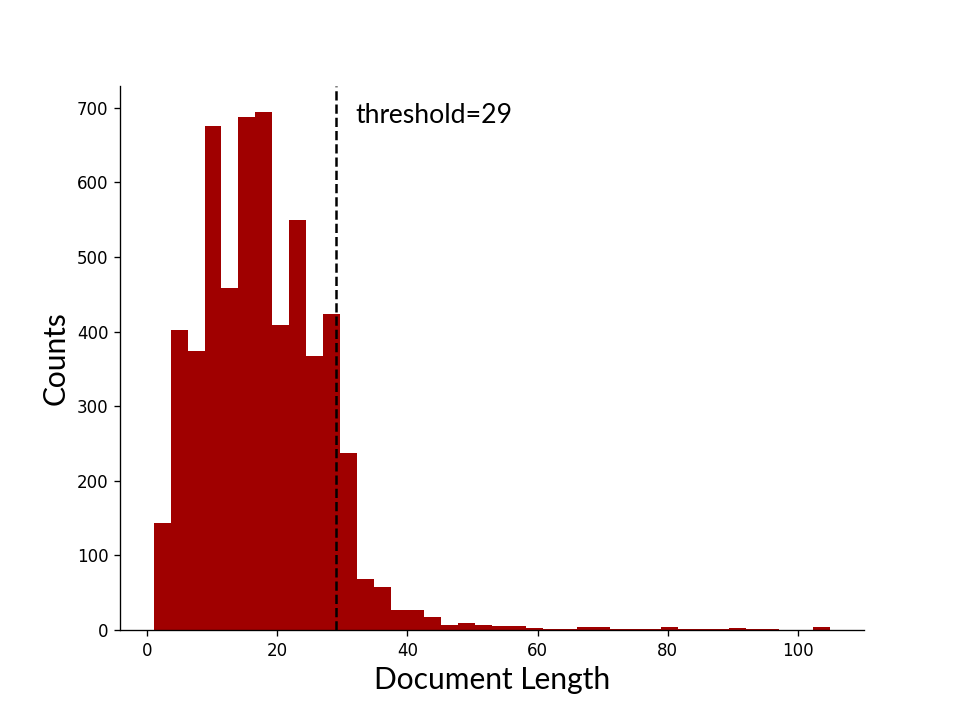 Here are some examples from the new WNUT17 test split:

We can also split datasets based on the presence of morphological features and inflections. Recall that words have a base form (lemma), whose structure changes (inflected) based on their role and function. For example, consider the sentence, “She was reading the paper,” if we run spaCy’s Morphologizer, we obtain:

The lemma, read, is modified into reading to express the progressive aspect (Aspect=Prog), and the present tense (Tense=Pres). The same can be said to the lemma, she, where it’s a third-person singular noun (Person=3|Number=Sing) of the feminine gender (Gender=Fem).1

The idea then is that if we split a dataset based on its morphological features, e.g., put all singular nouns (Number=Sing) or masculine gender (Gender=Masc) in the training set; then perhaps we can better diagnose if our models are robust against these inflections.

This is exactly what I did. By separating a few arbitrarily chosen features (I admit a lot of experimentation is still needed for this), I created a train-test split based on a document’s morphological inflections. In this case, I made sure that atleast \(10\%\) of the samples end up in the test set. The results are as follows (lowers values are highlighted):

Lastly, we can split datasets by perturbing the test set. In this section, we’ll focus on entity switching or substituting specific entities with counterparts from a different locale or region. It is not strictly a split because we’re just updating entities. We may even consider this method a combination of the first two, i.e., applying heuristics to maximize the divergence between training and test sets.

Agarwal, Yang, et al. (2020) used this approach to audit the in-domain robustness of NER models. They replaced specific entities in the ConLL 2003 dataset with the same type but of different national origin. They discovered that some systems performed best in American and Indian entities and worst in Vietnamese and Indonesian entities. For example, using BERT subwords on ConLL 2003 reduced the NER F-score from \(94.4\) to \(88.2\) when using Vietnamese entities. It’s an interesting study that demonstrates how biased some NER systems are.

I tried replicating the entity-switched ConLL 2003 dataset they used, but I had difficulty reproducing them from their Github repository. So instead, I used the name-dataset library to get a random sample of Indonesian and Filipino names,2 then substituted them into our three datasets. Below are the results:

Switching entities caused a drop in performance. Note that I’m not even precise with how I substituted PERSON names, i.e., I didn’t consider if it’s a full name or first name, and I didn’t regard the name’s gender. Nevertheless, creating this split still caused issues with the transition-based NER parser. Below is an example:

In this blog post, we examined the scenario where a typical train-test split may overestimate a model’s performance, thereby causing it to underperform in the wild. As it turns out, even standard NLP benchmarks can fall into this trap.

We then introduced three alternative splits: splitting by maximizing divergence, in this case by optimizing the Wasserstein distance, splitting by heuristics such as document length and morphological features, and splitting by perturbation, as illustrated by entity-switching. We tested these methods in three NER datasets to test spaCy’s transition-based NER system. We learned that robustness is still an issue given these benchmarks.

I think the best that we can do as machine learning practitioners is to create systems that allow checks and balances to ML systems. This might mean creating tools to measure robustness, reporting failure modes, and evaluating a model on a diverse set of samples. We’re still a long way to fully solve this problem, but acknowledging that it exists is a big step forward.