March 2021—This blogpost underwent major revisions. Instead of just describing what Cellular Sprites is about, I want to talk about my creative process and motivation— from Seagull to Sprites-as-a-Service—and explore some underlying themes in between.

There is something magical about discrete things working together to achieve a common goal. It may be particles in a swarm algorithm, or contributors in open-source projects. Independent as they were, the sum total of their actions give way to a recognizable whole.

What piqued my interest is this idea of emergence, where new properties show up when discrete units interact with one another. I’d like to explore this idea further with Conway’s Game of Life (Gardner, 1970), a type of cellular automata with well-defined states and self-propagation. It is governed by four rules (Van der Plas, 2013):

Units turn into groups, groups turn into systems, systems turn into complex ecosystems and so on. Sprites-as-a-service is a product of this exploration. The creative process closely follows the evolution I described: one system built on top of the other, creating another system that self-propagates on its own.

In this post, I’ll talk about how Sprites-as-a-service came to be.

Looking back, I believe that there are three major developments in the creation of Sprites-as-a-Service. First, I laid the foundation by creating a framework for cellular automata called Seagull. Then, I used the said framework to explore the creation of sprites in Cellular Sprites. Finally, I refined my ideas in Cellular Sprites and improved upon it in Sprites-as-a-Service.

Building the language through Seagull

As with the idea of emergence, I want to start by building fundamental units that I can configure into a more complex system. Unfortunately, there are none to few generic implementations of it in Python— most are one-off solutions. Looking back, I’d say that it was a good problem: the absence of a framework allowed me to create my own.

For this framework, I want to have a language that makes it easier to express how cellular automata is done. To achieve this, it’s important to think of “verbs” that map to the experimentation lifecycle: create a board, put an automaton, run the simulation, etc. These action words are then manifested through Seagull’s API.

I’m satisfied with the API design for I can see how expressive and extensible it can be for future use-cases. For example, even if I have a preset number of Lifeforms available, there is still the generic “Custom” lifeform that allows some variability.

Building Seagull has taught me to think in terms of objects and actions: there is a Board (obj) that you add (action) Lifeforms (obj) onto, you feed (action) the Board (obj) into a Simulation, then you run (action) the Simulation. As I worked through the next iterations of my project, Seagull has been the fundamental unit of my creative process. Later on, these actions will be aggregated into higher-level abstractions.1

Now that I’ve set up the cellular automata framework with Seagull, the next step is to apply it by generating higher-level abstractions. There are a lot of artistic procedural generation ideas that cna be done with Conway’s Game of Life, so I went with creating pixelated sprites.

My inspirations include Github’s identicon, Ebyan Alvarez-Buylla’s procedural space invaders, and CryPixel’s procedural pixel art generator. They have a distinct feel upon them, and the mirroring technique allows the generated sprites to look more convincing. 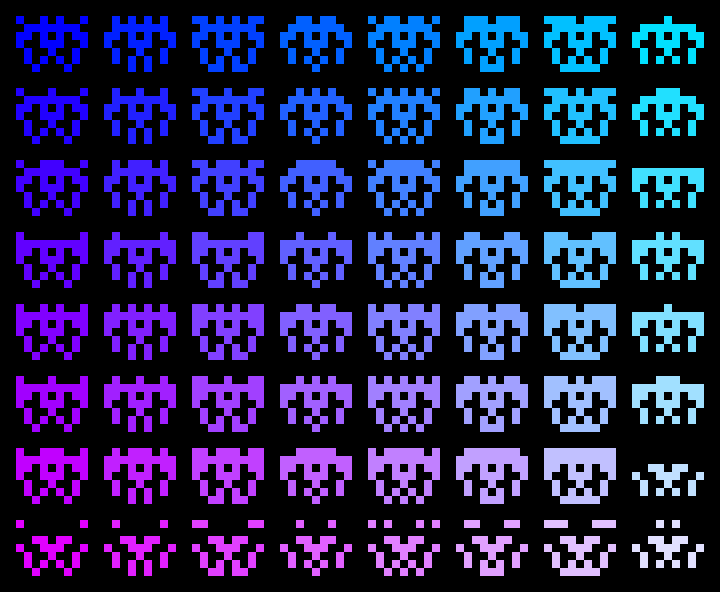 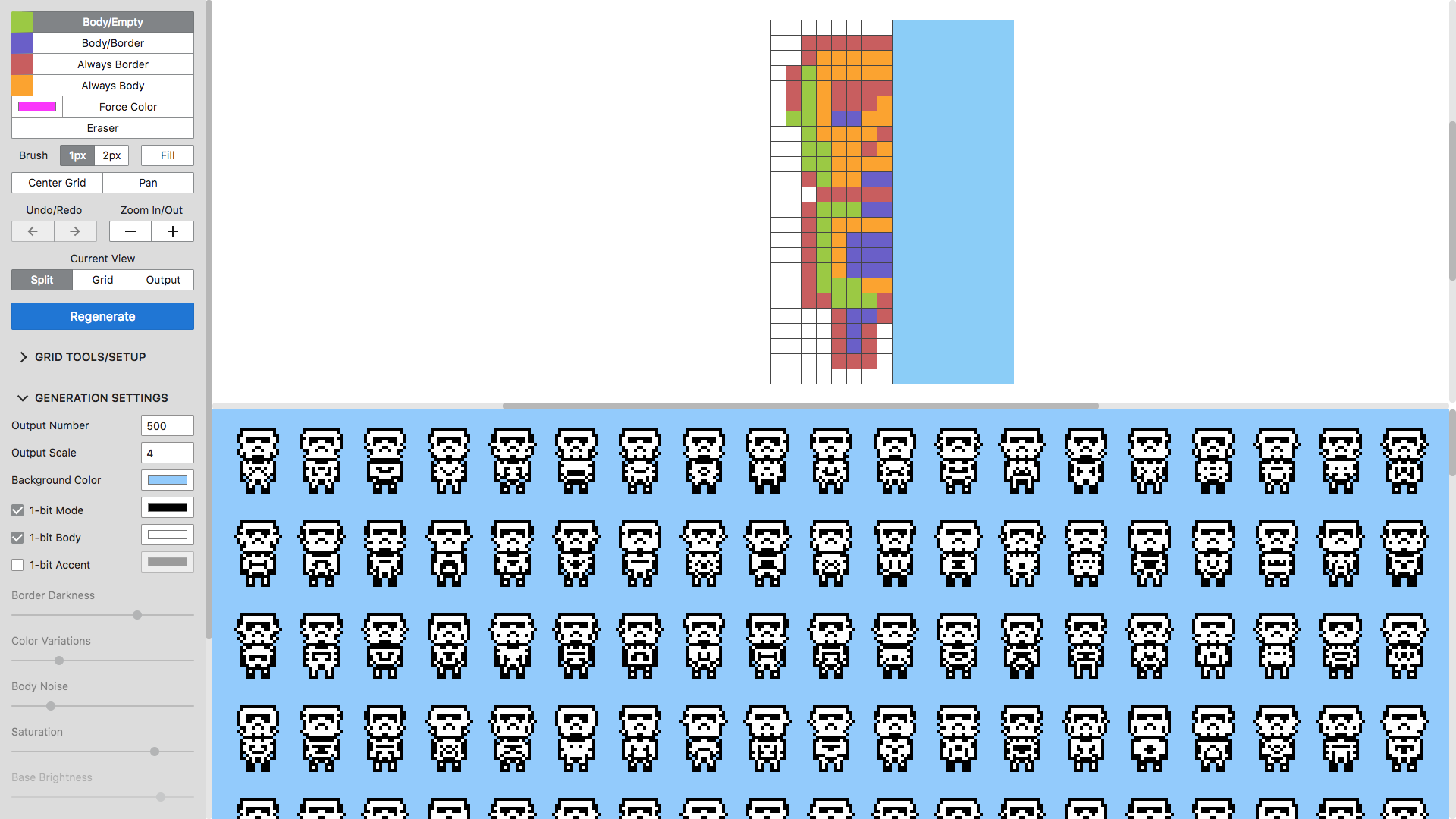 Figure: Some of my inspirations in Procedural Sprite generation

Given that, the initial sprite algorithm is simple:

I also played with colors for a few more iterations. At first, I settled on a grayscale version (or one of matplotlib’s colormaps), but the image looked flat. I also tried to manually add colors, but it didn’t stick that much:

Later on, I realized that adding a solid black outline makes the sprite stand out—it looks more appealing and recognizable. Making a solid outline sounds easy, but it took me some time figuring out how to make it. So, I just settled on a brute-force approach: for each cell in the matrix, I look around its neighbors, and paint them black if they are near the edge. The resulting sprites look better visually: 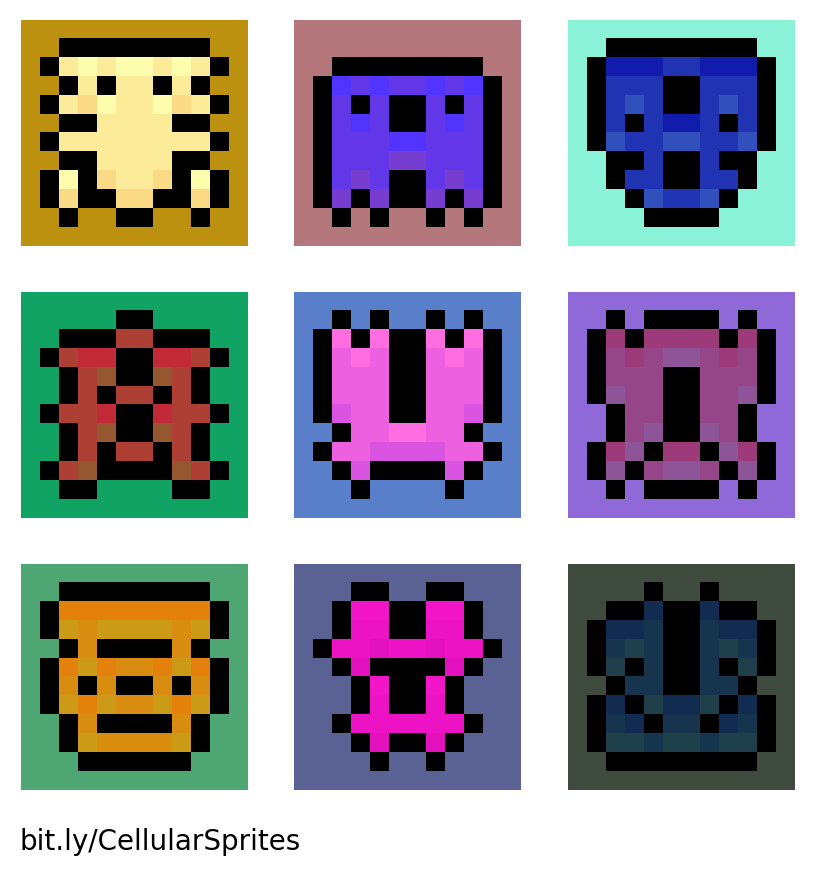 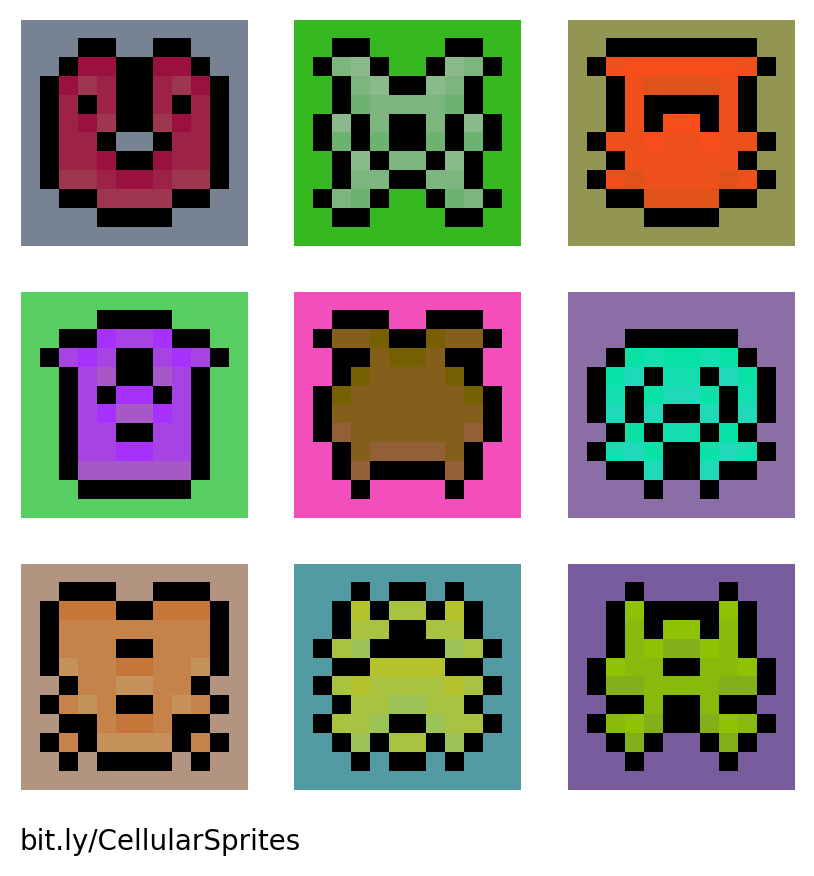 There were some parameters that need some tweaking. For example, I ensured that the number of live cells should be around 40-60% of all cells in the 4x8 grid. However, I realized that it doesn’t really affect the look of the sprite. What mattered the most are the extinction and survival parameters.

Extinction and survival affect how “easy” a cell lives with respect to its neighbors. They’re just made-up terms that I used to control overpopulation, stasis, and reproduction. A high survival rate causes big, blocky sprites, whereas a high extinction rate creates mosquito-like thinner sprites. I exposed these parameters so as to introduce variability in the application. 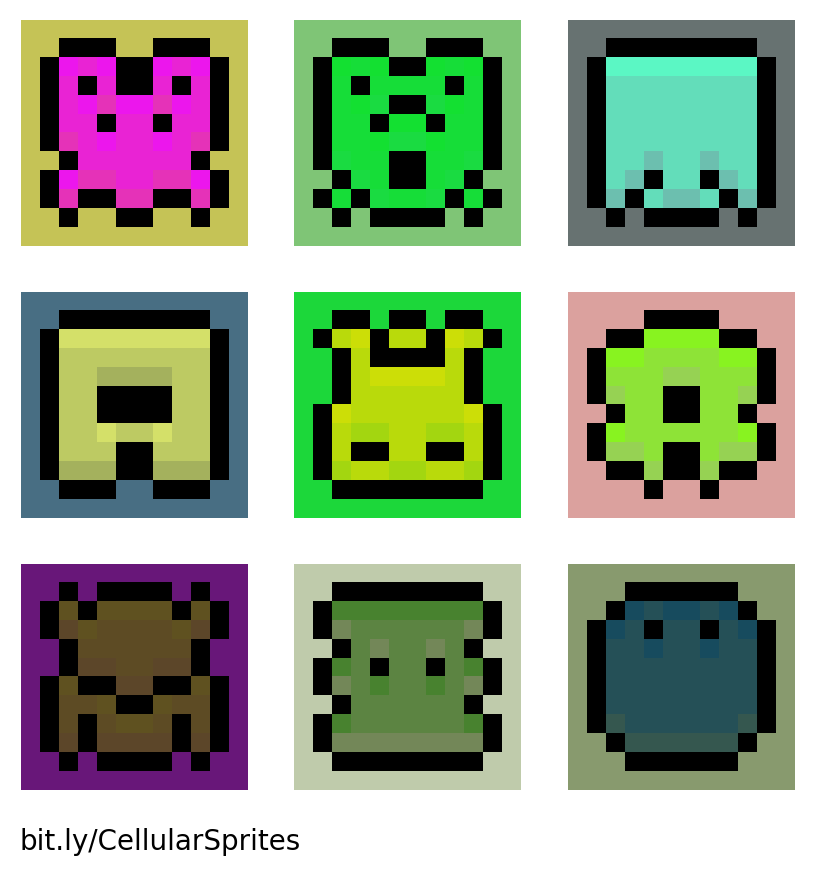 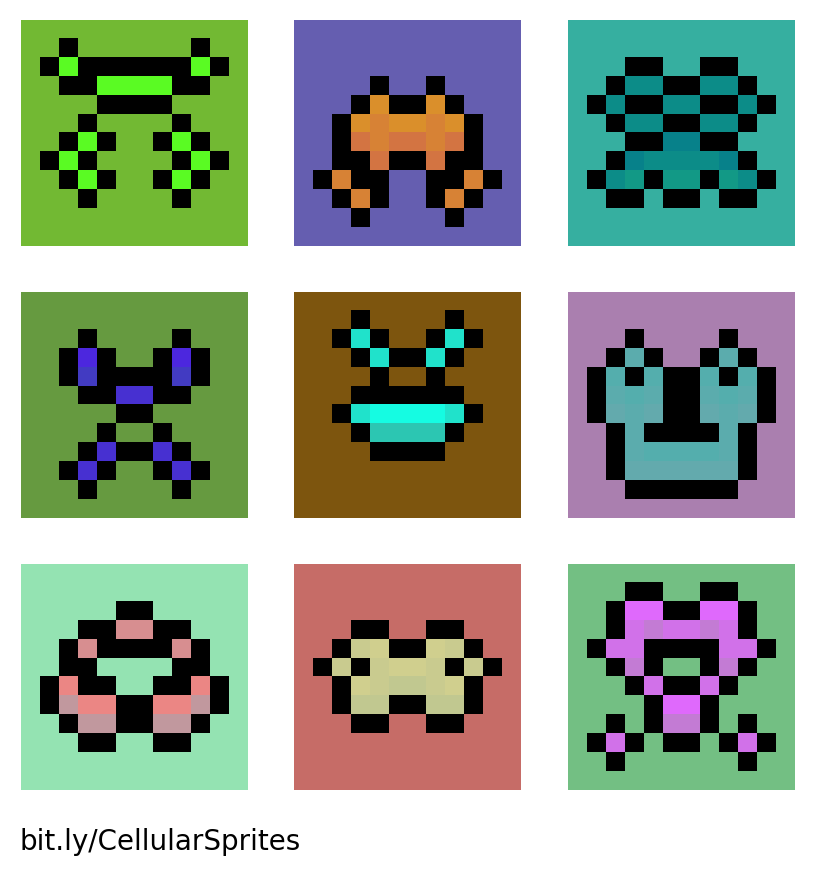 Taking a step further, I decided to incorporate shading in the sprite’s fill color. I computed the gradient of the resulting sprite, shift the resulting matrix 1 pixel vertically, and map the resulting values in a custom colormap. This then removes the flat-ness of the sprite’s color and add a bit of dimension to its look. The effect looks more apparent if the color scheme is comprised of different colors:

Lastly, I used this opportunity to learn new tech. The initial version of my explorations (known as Cellular Sprites) was made in Streamlit. I arranged the generated sprites in a 3x3 matrix, and added a sidebar with some parameters to play around. Although Streamlit made things alot easier, its default UI didn’t convey the look that I want to achieve. However, it was a good run as a proof-of-concept, and I’m proud of my output.

Figure: You can try the Cellular Sprites streamlit app here.

Emergence, determinism, and identity in Sprites-as-a-Service

After establishing the main ideas and execution in Cellular Sprites, I decided to take it a step further and endow a form of identity in Sprites-as-a-Service. The generated sprites were based on emergent behaviour from randomness2 shaped by a rule— what if we can control this randomness with a seed? Better yet, a seed we can personally identify with?

In Sprites-as-a-Service, the defining feature is the ability to create a unique sprite based on a name (or any other string). It’s like your own fingerprint, borne out of emergence. This, in my opinion, creates a level of conflict: since you defined the initial conditions, is the system truly random?

This tug-of-war between randomness and determinism enthralled me. I can specify the seed, but at a certain point, I give everything to “chance.” Is it truly chance, or just a smorgasbord of systems that we haven’t comprehended yet? I always remember coin-flipping, the definitive example in Statistics 101, to be a highly-deterministic act if we know certain variables and conditions such as the momentum of our arm, air resistance, weight of the coin, etc. It seems that the same principles3 apply in Sprites-as-a-Service: we’re aware of what the initial conditions are (it’s exposed in the UI), yet there is a certain moment—perhaps in the click of the button—that we leave everything to chance.

Perhaps, that experience of leaving everything to chance and getting a result out of it led to surprise. Some people were delighted (or disappointed) with the sprites that emerged from their names. This is the experience I want to capture. The system is deterministic for I know the algorithm and initial conditions. Yet, this determinism didn’t stop me from being surprised with the results!4

Sprites-as-a-Service is the final step of this exploration. After building the fundamental units in Seagull, and creating the algorithm in Cellular Sprites, this project packaged them together into a self-organizing whole. Because any string can be a seed, there’s almost an inifinite number of initial conditions to generate the sprites from.

In this post, I went through the creative process and motivation for building Sprites-as-a-Service. With my interests in emergence and identity, I employed techniques in procedural generation and cellular automata to create interesting sprites. It was a worthwhile endeavor and I’m quite proud of it.

There’s a lot of things that I still want to explore in the realm of these topics. One example is anticipation, that moment of waiting between clicking the “Generate” button and the app showing you the results. I remember the old days of Google Deep Dream (around 2015, when GANs aren’t invented and ConvNets are still in its early days), when you still need to wait for days on end before it generates dream versions of your image. I like that idea of anticipation and waiting, and maybe something I might delve further.

As for wins, I’ve seen reimplementations of Sprites-as-a-Service. One of my favorites is Infinite Sprites by Daniel Jackson. First, he ported the whole algorithm into Javascript, and have a forever-scrolling webpage that generates sprites as you go along! In addition, Ron Gilbert, the creator of the famous pixel-art indie Thimbleweed Park, featured my work in his blog.

This is mostly it for Sprites-as-a-Service. I think I was able to explore what I wanted to explore, and build what I wanted to build. Good thing my Cloud subscription doesn’t charge that high so I can just keep it running in some machine somewhere— waiting for its next opportunity to emerge.