Recently, I’ve been developing on a Windows machine, and it was surprisingly fun. At first, I was anxious because of my previous experience with Windows. Five years ago, installation instructions won’t just work, each step needs a workaround,1 and things break often. It was unpleasant. Now, I feel like the ecosystem has changed for the better.

In this blogpost, I’ll share some of the steps I took to make my machine developer-friendly. Hope you find these helpful as much as I did:

Installing Windows Subsystem for Linux 2 (WSL2) feels like cheating because I’m literally just running Linux. Installation was painless, and all my dotfiles for vim, tmux, and bash worked out of the box. Also, you can choose any distro you want from the Microsoft Store! I’m pretty basic so I went with Ubuntu 20.04.

I also installed Visual Studio Code (VSCode) since it can seamlessly open files in both my Windows and Linux filesystems. Back then, I was bitten by the CRLF problem when opening files between the two. This has been solved in VSCode.

However, I wouldn’t even stop there. Instead of using the “WSL2 Terminal,” I went for the Windows Terminal (you can also find it in the Microsoft Store). It’s an emulator where you can open PowerShell, Command Prompt, and Bash in multiple tabs!

Figure: If you look at the top, then you can see that I can open Bash, PowerShell, and the Windows Command Prompt in just one place using Windows Terminal

It’s customizable too. You can change the color scheme and the font. Personally, I love using Gruvbox Dark and Fira code.2 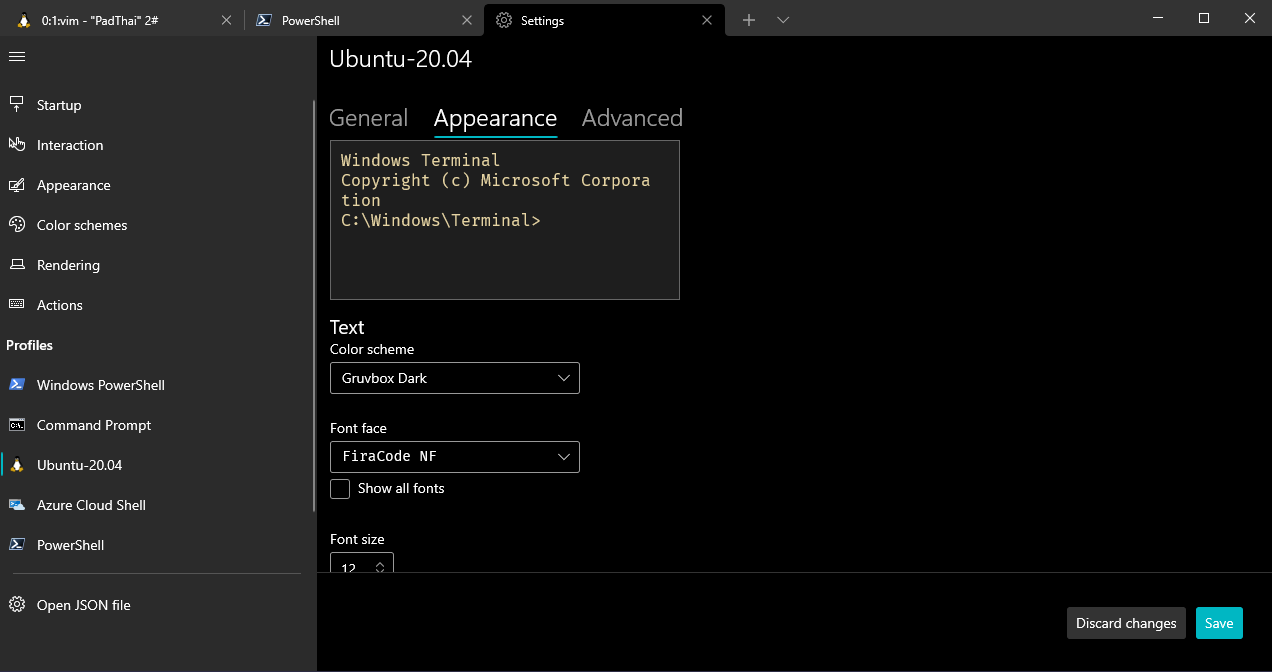 Figure: You can update the font and color scheme in the Settings tab

After a few tweaks, my terminal already looks like the one I’ve been accustomed to in my Linux machine. 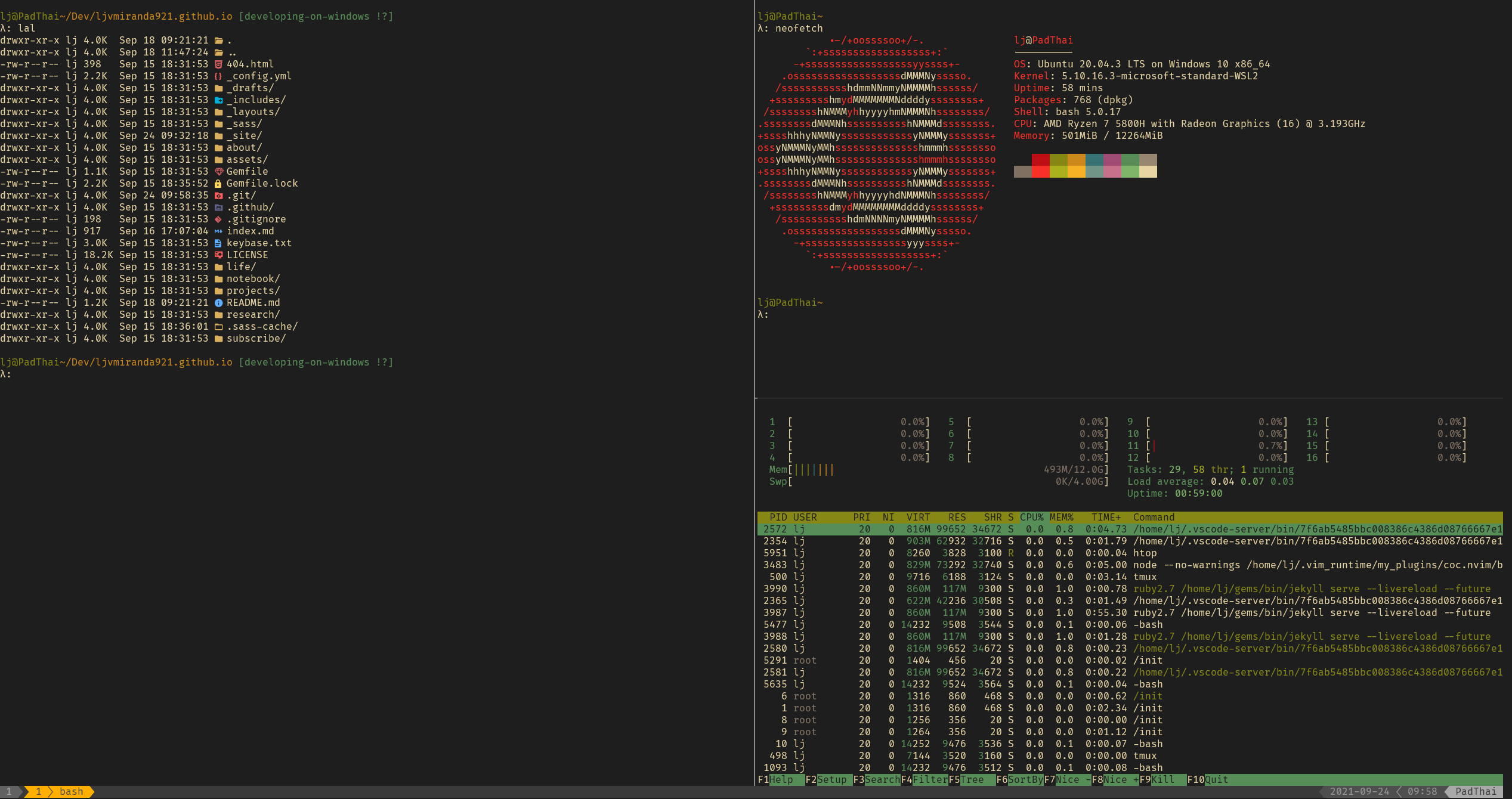 Figure: With WSL2 and Windows Terminal, I was able to replicate my Linux setup

Lastly, another thing I did is to set Bash as my default profile, and update the starting directory to //wsl$/Ubuntu-20.04/home/$USER/. So whenever I open the Windows Terminal, the bash profile is automatically loaded and is set to the actual home directory for Linux.

Now that I’m looking at Windows with my more experienced developer eyes, I was curious as to how I can get around the OS through the shell. Previously, I’ve always used the GUI. With that, I learned that the main entrypoint is through PowerShell.

I don’t really see myself writing PowerShell scripts in the future. So in order to dip my toes into the environment, my tiny task is to prettify my terminal.

However, we won’t be using the pre-installed “Windows PowerShell” for our tasks. Instead, we will download another PowerShell (named just “PowerShell”) from the Microsoft Store. Confusing? Yeah, here’s what I got:

You can check your PowerShell version by typing $PSVersionTable and checking the value in the PSVersion key. On my machine, PowerShell 7.x is installed side-by-side with PowerShell 5.1. I am not sure if it’s possible to upgrade 5.1 to 7.X., so I opted to keep them separate.

Personally, it feels similar to the Python 2 to 3 conundrum. Sometimes it’s okay to keep them both so as to not break anything in your system.

The next thing I did is to download the Chocolatey package manager. We will use it to install the prompt theme engine for PowerShell. You can liken Chocolatey to apt in Linux. Also, note that it’s a third-party app, as there is an official package manager by the name winget.

I chose Chocolatey over winget because the former seems more mature and is feature-complete. To be honest, I am not sure of all the nuances between the two. A quick Reddit search on “winget vs chocolatey” shows some hesitation from other developers over winget. As for me, I value stability, so I just went with Chocolatey.

Oh-My-Posh is a prompt theme engine for customizing PowerShell. I found this through Scott Hanselman’s blogpost on making your terminal pretty. To install it via Chocolatey, I ran:

Then, I have to add the following line to my $PROFILE:

I spent an hour figuring out where that $PROFILE file is located. Turns out, you can find it at:

If you haven’t configured your PowerShell profile before, then that file may not exist yet. Create one and copy the oh-my-posh line above. Instead of navigating through your File Explorer, you can jump ahead using VSCode by typing:

You can also change your theme by updating the --config option. There’s a wide selection of themes, but I opted to use nu4a as it fits nicely to Gruvbox.

Figure: At first, some glyphs won’t render properly. We’ll fix that by installing a NerdFont-compatible typeface Most fonts were already patched, so you’ll most likely find a patched version of your favorite font.

At first, the prompt looks weird because some glyphs didn’t render properly. To fix that, I used the patched version of Fira Code so that I have access to all icons and shapes.

Figure: After installing the patched font, the powerline should now render properly.

I decided to be more extra and installed Terminal Icons. This adds small and cute icons whenever you type ls and dir. I installed it by typing the command below:

and by adding the following line in my $PROFILE:

Figure: I installed Terminal-Icons because I want to be more extra

Lastly, I installed Microsoft Powertoys to help improve my developer experience. You can think of it as a collection of tools bundled into one package. One of my favorites are:

Aside from these two, there are still a lot of utilities included in Powertoys, but I still have to check them out.