When I first saw Avengers: Endgame in theaters, I noticed that their time travel rule is quite similar to the Git branching model. Referred to as the time heist, our heroes travelled through time to recover the stones and undo the effects of the snap— thereby saving all.

The Ancient One: “The Infinity Stones create what you experience as the flow of time. Remove one of the stones, and the flow splits.”

Creating branches and alternate realities…isn’t that vaguely familiar with Git? As it turns out, software developers are doing their own version of time-travel in their day jobs! Let me demonstrate that in this blogpost by explaining the plot of Avengers: Endgame in five git concepts!

This one is straightforward so let’s get it out of the way. After that shocking decapitation of Thanos and with no hope in sight, we were then transported five years into the future.

This is a classic example of a fast-forward merge. This occurs when there is a linear path from where we are now (i.e., death of Thanos) to our target branch (i.e., five years later). No time-travel shenanigans, just straightforward combination of histories.

You can do this by:

Checkout a point in the past

With the stones reduced to atoms, our heroes decided to conduct a time heist. First, they need to identify when in their shared history the stones are within reach.

In Git, you can view an object’s full history by typing:

This also allowed them to pinpoint the exact location of the stones. After determining those crucial points, they used the remaining Pym particles to traverse the quantum realm.

Turns out, we can also do the same thing! The log command from above will then give you a unique hash so that you can reference it as you time-travel:

Whenever our heroes travel to the past and tamper with the stones, they get into a state outside the context of time. It’s a state of limbo where a potential new reality may be born. In Git, it’s like being in a state where HEAD is detached— a headless branch: 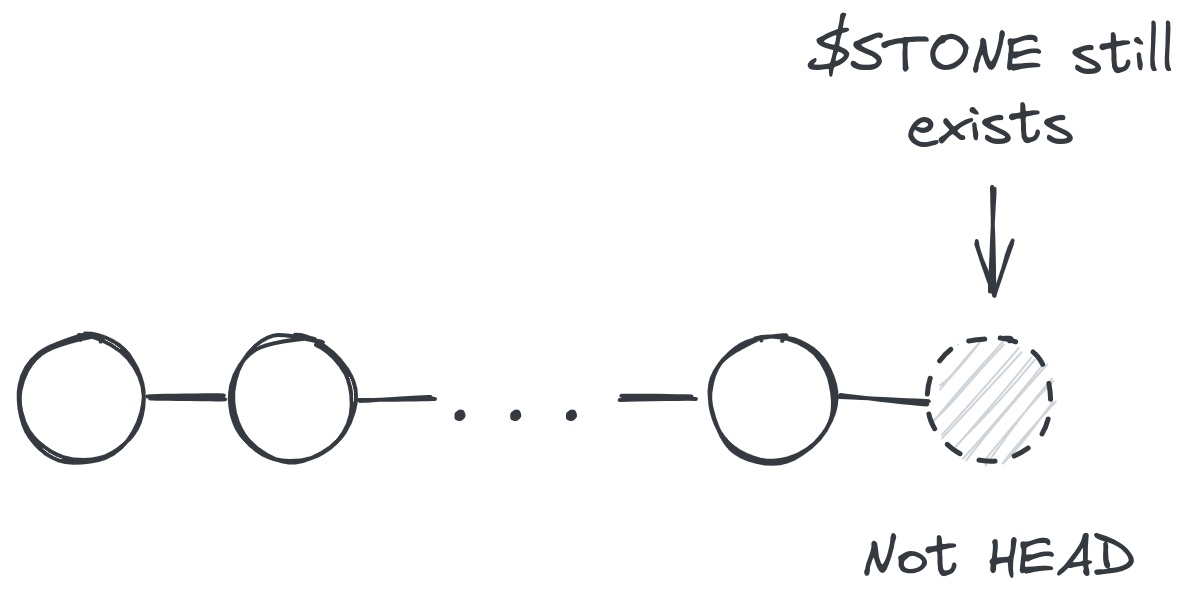 By procuring the stones from an earlier timeline, they then create an alternate reality:

…and procure the stones from earlier timelines. As with the clip above, we had Hulk successfully obtaining the Time Stone from The Ancient One:

Iron Man and Captain America weren’t so lucky. Their first attempt to get the Space Stone failed, with the past Loki escaping with it. By doing so, they’ve inadvertently created a stray branch:

This branch didn’t merge to master and it’s currently living its own life. We’ll probably know of this Loki’s fate in his standalone Disney+ series!

Nevertheless, our two main protagonists managed to obtain the Space Stone by going back to 1970— also leading us to a heartfelt conversation between Tony Stark and his father:

After successfully obtaining all the infinity stones, our heroes built their own gauntlet to undo the snap. In the master branch, we have:

A few seconds later, we hear birds chirping and see Hawkeye’s snapped wife calling him. The sun shines and it seems that our heroes have saved the day!

But, a pull request from another reality came in…it’s Thanos from the feat/get-power-stone branch! The changeset he’s bringing ensued a merge conflict!

Conflicts happen when two developers updated same lines in a file, or if one developer deleted a file while another is modifying it (Atlassian, “Understanding Merge Conflicts”). Because Git cannot easily determine which change is correct, it’s the responsibility of the developers to resolve it.

And resolved it they did! After a climactic battle that set our heroes against the bulk of Thanos’s army, Iron Man got hold of the stones and ran the following command:

We see Thanos and his army disappearing, and Tony Stark in his final moments. The question still remains, what is the effect of Iron Man’s snap?

Perhaps we’ll never know, but thanks to our Git-model, we were able to surface such questions!

In the epilogue of Endgame, we see Captain America returning the stones in their original timelines. However, instead of going back to HEAD, he stayed in a particular commit to pursue a committed relationship with Peggy Carter.

All is well, but we see him again back in HEAD as an older version of himself. Initially, I thought that he decided to live in an alternate reality, but did he perhaps rewritten history by rebasing?

This definitely opens up a lot of questions:

Using our Git model, rebasing with minimal intrusions seems to be the logical explanation. We’ve also seen our Cap grew from being a naive idealist, so perhaps he also learned to respect the timeline. That’s really hard But I guess only the worthy can pull it off.

In this blogpost, I talked about different ways we can explain certain plot points in Avengers: Endgame using the Git model. I’ve been reading up a lot on various rules of time travel in fiction, and it’s exciting to apply it here. I hope you enjoyed reading this as much as I did.

Of course, I’m aware that time travel in Endgame doesn’t map exactly to the Git model. So let me know if there’s a better way I should represent some plot points!