There was a time when I was tasked to maintain a system, and fix it iteratively whenever users report bugs. I was not on building-mode: the priority isn’t the next killer feature or the next phase in the roadmap—it’s simply to ensure that the software is working as expected. During those weeks of squashing bugs and triaging errors, I realized that debugging isn’t as straightforward as I thought it was!

Debugging seems to be a skill expected from anyone entering into tech, but the knowledge on how to effectively do so is siloed-out. It makes sense because as you learn how to code, you’ve certainly hit errors and debugged your way out of it. Then, as we went through our own tech journeys, we developed a tacit knowledge1 on how to debug.

I realized that I don’t have a “mental framework” on how to debug effectively. Usually, I just rely on my tacit knowledge and practical experience.

I realized that I don’t have a “mental framework” on how to debug effectively. Usually, I just rely on my tacit knowledge and practical experience. Hence, I devised a short three-part framework for myself, and I’m sharing it to you through Pixel Art2! 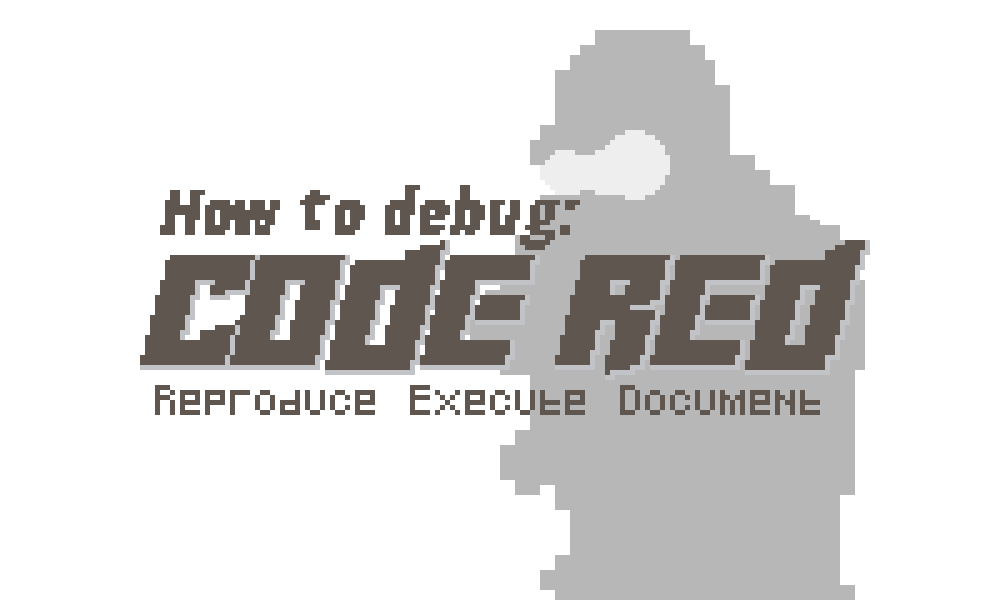 The color red hints at urgency, just like those movie scenes where enemy aliens attack and emergency alarms are set off—that’s how I see the process of debugging.

R.E.D. is also an acronym for the mental framework that I’m trying to practice: it sounds nice, and on theme with my Space Force pixel art!

R is for Reproduce

One of my first steps in debugging is to reproduce the bug in a controlled environment. I do this in order to confirm that the bug exists, and to isolate it given a minimum set of variables.

I reproduce bugs by ensuring that I accomplish the following in my project:

E is for Execute

When I was still starting out, I immediately jump into this step and brute force my way into the debugging process. As I squashed more bugs in my career, I learned how to be tactical, thorough, and precise. There’s a logical reason why bugs happen, and it’s important to narrow-down what causes this behaviour.

There are three tools that helped me in this process: loggers, debuggers, and the test suite:

D is for Document

Documentation is one of the most important and forgotten parts of debugging—I know because I’m guilty! There are plenty of benefits in documenting code, some of these we may already know by now: easier for others (including future us) to read our code, good way to step-back from biz logic to more high-level thought, and keeps a history of our project.

I try to document bugs (and their fixes) by following these practices:

In this blog post, I talked about my Code R.E.D. framework on debugging. It’s an acronym for a three-step process that I follow whenever I want to squash some bugs: R for Reproduce, E for Execute, and D for Document. I also explained some practices that I follow as I go through each step. You might notice that these guidelines are still rough, but I think that having a simple methodology on how to approach debugging is helpful.

Lastly, I hope that you enjoyed the Pixel art, and adopt the Code R.E.D. framework into your own workflows! If you wish to see more of my fledgling attempts in pixel art, follow me on my Twitter art account, @pixineries!