Update (2021-10-11): I changed my CI/CD system from Travis CI to Github Actions, and storage from Dropbox to Google Cloud Storage. It’s still the same process, and I’m still using the blang/latex image. You can find the old code in the v2.0 tag.

I do the same thing for my curriculum vitae: git commit, Travis build, deploy! You can even check the compiled document fresh from the server in this website’s header (look up!).

Just for fun, I set-up a cron job to build my CV every week. However, for the past few weeks, I’ve been receiving some weird build failures: 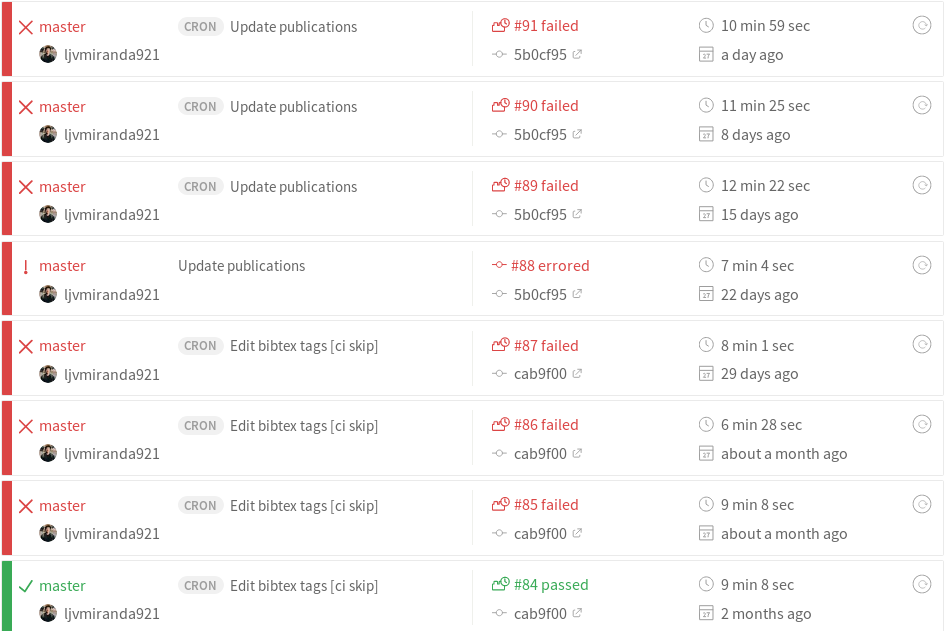 Figure: Yup, I’ve been ignoring this problem for the past two months

As it turns out, my set-up script, tlsetup.sh is causing some problem. A short intro on tlsetup.sh: it’s a small script I made that does a little bit of everything to configure a working LaTeX environment before compilation:

You can check what it looks like here. It looks convenient, but I want you to imagine how much boilerplate must be done in order to set-up a working LaTeX environment. I need to stamp down all dependencies to prevent my compile commands from failing. Of course I can install a full LaTeX environment (i.e., texlive-full), but a 3-5 GB install for a 1-2 page CV skimmed briefly by a recruiter isn’t worth the effort (As if I’m not making a lot of effort on this already).

Going through the job log, I found a connection error that causes a failure whenever TexLive or some package is downloaded by Travis-CI straight from the TUG file server (ftp://tug.org).

The result: an incomplete LaTeX environment and a failed LaTeX compilation. Looking closely at the image above, we can see that for a specific package, TexLive follows a two-step process:

The FTP command returns an error code in the 400 series most of the time. A quick search of FTP error codes reveals that a return code of 400 indicates that:

the command was not accepted and the requested action did not take place, but the error condition is temporary and the action may be requested again

Okay, that is not deterministic. Sure, we can have some gotchas in Travis where we keep on retrying the download until it succeeds, but this makes our system all the more unreliable. Remember, we are not installing the full TexLive version (about 3 GB). We only install a minimal version, and incrementally add package dependencies according to our project needs. If we have, say, 20 dependencies and atleast one of them fails, then the whole compilation will fail.

In addition, there seems to be some timeout problems with wget and tlmgr concerning Travis-CI:

Either way, it causes me anxiety whenever a previous build that works yesterday will suddenly stop working today. Thus, one workaround is to find another “environment” where LaTeX is already installed and working, then issue our compile commands (pdflatex, biber, etc.) inside it.

Docker is wonderful. It gives me a container-based solution that jives beautifully with my continuous integration practice. Thankfully, for LaTeX, we have blang’s LaTeX docker image. The way it’s even advertised seems to be a direct answer for my needs:

Awesome! Now I just need to set-up Travis-CI to pull this image and I can go on my merry way. But before that, a little bit more about this image:

(So a shoutout to blang/latex-docker for making my job much easier!)

This is how much boilerplate I had when using the Docker-less approach. Because there is already a container with a working LaTeX environment, I don’t need to go at great lengths setting-up an environment to compile from source. I just need to pull from the Docker image and issue some pdflatex commands within that image.

In addition, I don’t even have to worry about listing specific dependencies because I can just change the image into latex:ctanfull for an updated package independent from the system or Linux version I have spun-up (remember, this is a containerized solution, I don’t need to worry if I’m using Ubuntu 14.04 or 16.04).

My actual YAML file contains more than that due to some additional scripts for uploading to Dropbox every deployment and release. For our purposes, we simply download the latexdockercmd.sh script file and run latexmk within it.

I am also implementing a similar system for my thesis manuscript. This means I have a bibliography file (.bib) to organize my references. I use biber to compile my .bib file but as it turns out, biber is not installed in the blang/latex:ubuntu image. Took me three long hours to finally figure that out: 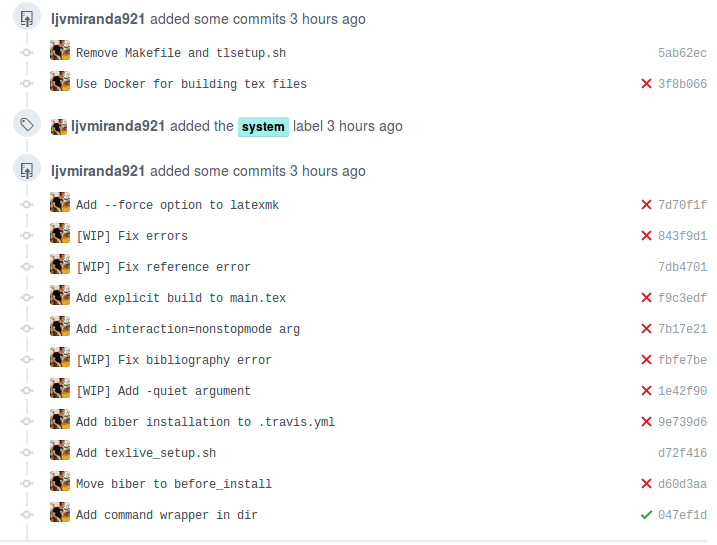 Figure: This is the programmer’s way of saying “Never give up”

Good thing I came around this issue saying that biber is installed in blang/latex:ctanfull image. So, if you are using biber in your project, make sure to point your IMAGE (inside latexdockercmd.sh) to blang/latex:ctanfull. In my case, I downloaded latexdockercmd.sh locally, modified it, and committed it as part of the repo (removing the need to wget and chmod during the travis build):

With a Docker-based solution, I was able to do away with the unreliability of creating a LaTeX environment straight into Travis. It also gave me the flexibility to use packages whenever I want to without worrying if it’s compatible with Ubuntu 14.04 and without updating my tlsetup.sh (which I deleted) script. Furthermore, it gave me a sense of comfort and accomplishment when I started seeing something like this: 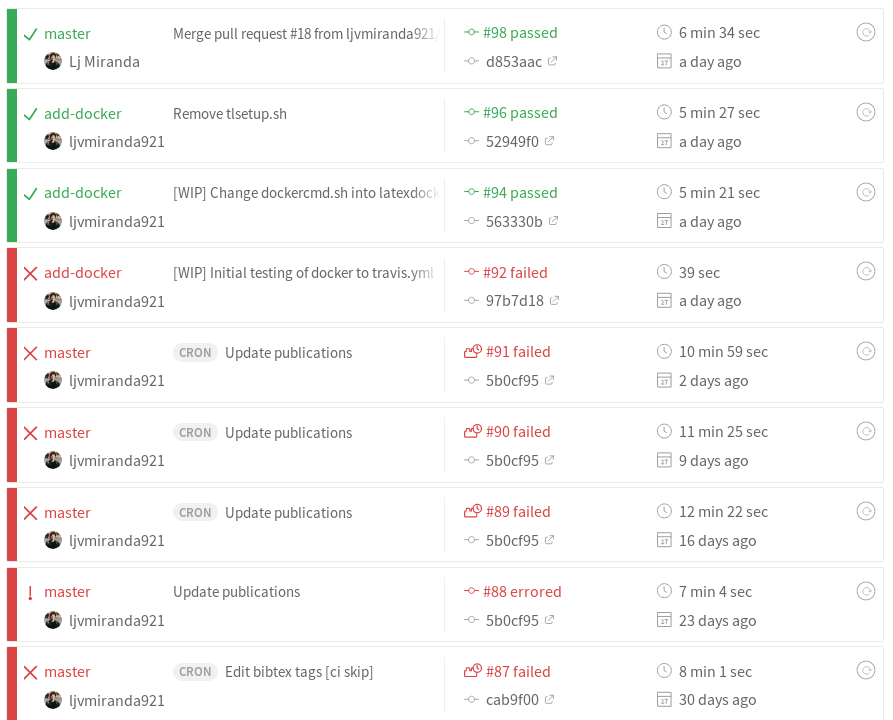 Figure: Those green bars gave me a good sigh of relief

It’s also interesting that I have reduced the duration of my builds. Below is a build time history for my thesis-manuscript. Unlike my cv project, I started this one with continuous integration in mind, so all builds use the traditional Docker-less solution (then the Docker-solution afterwards). 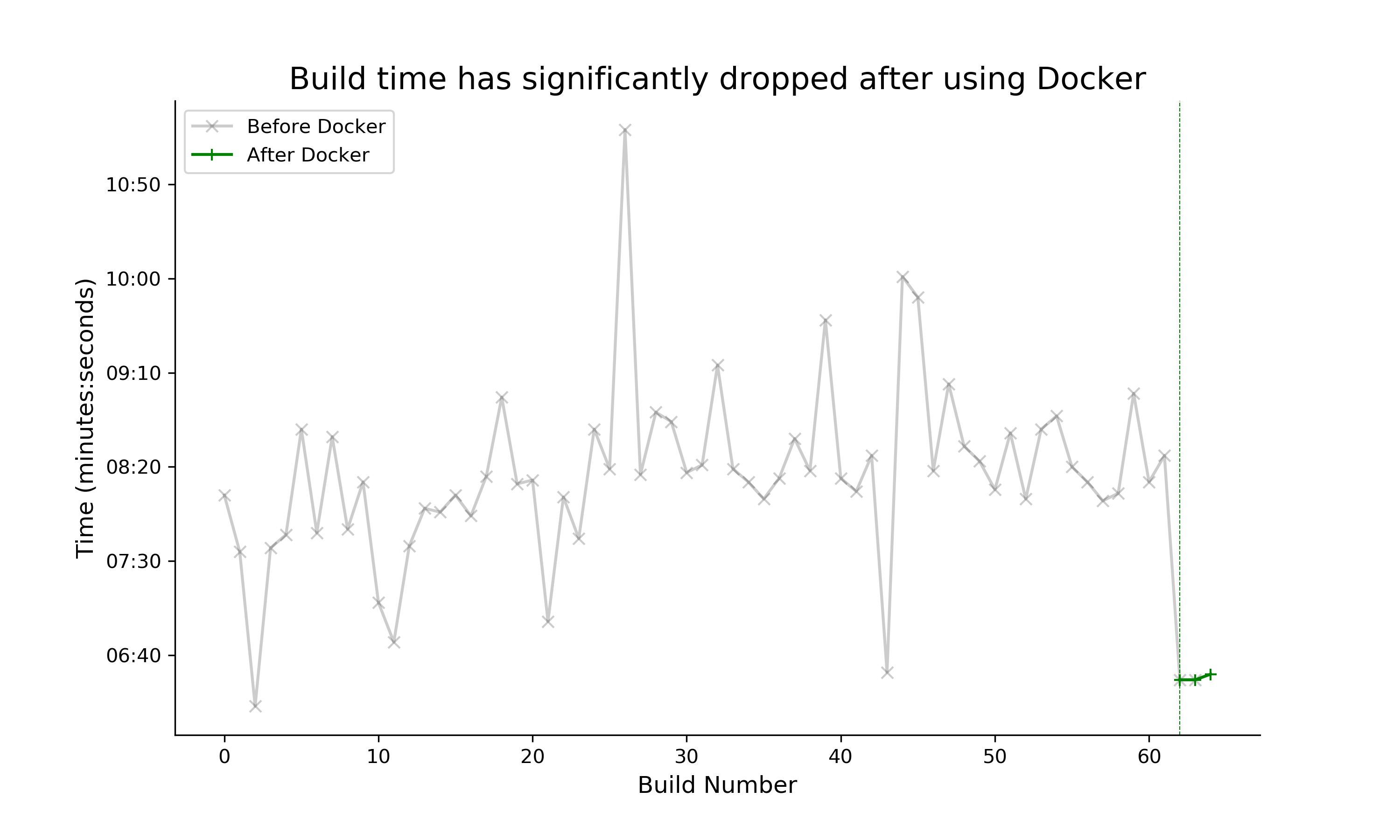 Figure: Good start. For the last three builds, I have consistently reduced the build time with a Docker-based solution

Of course, the scientist in me will say that we are only looking at three samples, so it’s not enough basis for a strong conclusion. Further testing is required. Nevertheless, seeing a decrease in build time is already a good start.

In the end, I shifted from manually installing a TexLive environment during my travis build into a full, Docker-based solution. This removes the unreliability in wget and FTP commands from Travis and harnesses the containerized capabilities of Docker. I don’t need to worry about Linux versions anymore, and I don’t have to painstakingly jot down all dependencies for every new project. I just need to spin a new container (ctanfull), set-up my .travis.yml, and focus on my writing.