Streaming tweets can be a fun exercise in data mining. With almost a million tweets being published everyday, there is an enormous wealth of data that can be gathered, and insights to be discovered. Today, we will utilize a powerful Python library called tweepy to access tweets from the web in real-time.

The main idea is that we will first (1) generate Twitter credentials online by making a Twitter App, and then (2) use tweepy together with our Twitter credentials to stream tweets depending on our settings. We can then opt to (3) save these tweets in a database, so that we can perform our own search queries or (4) export them later as .csv files for analysis.

In this tutorial, we will create two files, the Twitter scraper routine scraper.py, and the .csv exporter dumper.py. Steps 1 to 3 correspond to the scraper while the last step is for the dumper:

I’ll be using Python 3 (3.5.2) in conjunction with the following libraries. If you don’t have the following modules, you can simply install them using Git Bash and then pip install <module>:

If you don’t have a Twitter account, make one. Once you’re done, head over to https://apps.twitter.com/ and “Create a New App.” You will then see a similar form below: 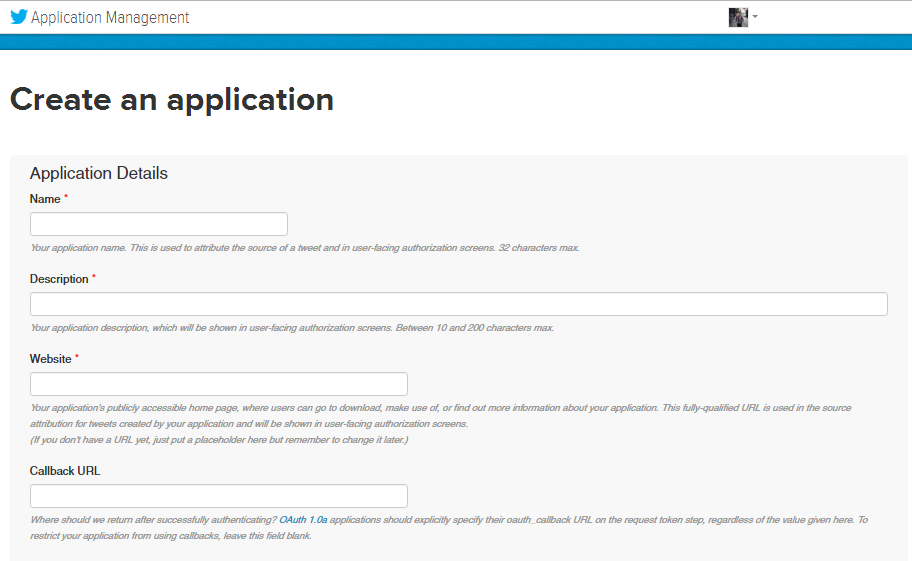 For the Name field, simply write a name for your application. It can be “MyApp” or anything. In the Description field, you can write something about your application so that you can be reminded later of what it does. Lastly, for the Website field, you can enter your own website, but if you don’t have any, https://www.site.com will suffice.

Note that we are not writing anything down in the Callback URL field. Leave that blank for now. Once you’re done, tick the agreement checkbox and click “Create your Twitter Application”

Once your application has already been created, a dashboard will appear in your browser. Go to “Keys and Access Tokens” tab and generate your consumer keys and access tokens if they’re not yet available. By the end of this process, we now have the following keys, and we’ll refer to them as the following:

Take note of these variables for we’ll use them later on.

We wil create the listener class that will inherit from the StreamListener object in tweepy. We’ll create a wrapper, and then define methods that will be activated depending on what the listener is hearing. In our case, we’ll build the on_status and on_error methods inside the StdOutListener class. The structure of our listener class is very short and easy. In its entirety, this is what it looks like:

As you can see, it is in the on_status method where we’ll put all the manipulations required. This can include storing Tweets into the database and other things. As long as we hear something through the listener, on_status is executed and it does all the things we put into it.

Our listener class, StdOutListener(), can then be used in order to stream tweets. In the same file (scraper.py), we write the following:

We simply import all our modules, and then plug in the credentials we obtained in the earlier step. Remember to put the code for our listener class right after (see comment). In our main function, we simply invoke an instance of our listener, and then use the tweepy methods in order to connect to our application.

Normally, it's a good practice that you store your Twitter credentials, or anything that is private in a separate file away from your source code. I suggest storing them in a config.ini file, then accessing them using the ConfigParser module in Python.

We can then add filters in the way we stream using the stream.filter() method. The track parameter is an array of keywords that will be listened into. This means that as our listener is running, it will only listen to tweets that contain the keywords below (logical OR).

You can actually try this one out right now. Just copy the code below, supply your credentials, and then type python scraper.py in your cmd!

Take note! Depending on your machine, sometimes there are errors that will appear such as: One very fast workaround that I don't recommend, but you'll find in most StackOverflow threads is to type in your console before running the scraper. The error often comes in the console and this solution is quite hack-ish and not much of a good practice. I suggest Dirk Stocker's answer for this. Using a wrapper is much more scalable and gives you good practice early on. But if you think his solution is quite difficult, I won't stop you from using chcp.

Save tweets into an SQL database

We will now extend our on_status method to include database storage. In this case, it will look like this:

As you can see, we’re accessing different parameters of the Tweet such as the user ID of the one who created the Tweet, the number of favorites, the location, and even the time it was created. We simply store them in different variables so that we can access them easily. Next, we create a table named myTable, and this is where we’ll store our Tweets. Using the dataset library, we can simply do this by invoking the table.insert command and supplying it with the dictionary made up of our Tweet parameters.

Lastly, don’t forget that we need to connect to our database, we do that by adding another line in our main routine like below:

We are then connecting to the database called tweets.db, and we’re doing that in just a single line! As you can see, this is quite easy! We can now start scraping our Twitter data! Again, just hit the console and type:

If we want to end the stream, just press CTRL + C.

Convert database into a .csv file

In this section, we will then create another file, dumper.py. It is made up of just four lines so here we go:

Here, we are connecting again to the tweets database. We then retrieve the values that can be found in our table myTable and store it in the variable result. Afterwhich, we invoke the freeze command in order to “convert” our database into a .csv file with the filename tweets.csv.

Thus, after scraping, we can then run this dumper using the following command:

This will then generate a file in the same directory as this code.

I hope that you were able to use this little tutorial in streaming your Tweets! Data scraping is one of the most useful tools in data science and getting sentiments from Twitter can prove to be valuable with its wide-range of applications. The final code for the scraper can be seen in this gist.