My year in commits: lessons and perspectives | Lj Miranda

Five-hundred twenty-five thousand, six-hundred minutes, how do you measure, measure a year?

As someone who’s been working closely with software for the past two years, I’d say in git commits:

For those who aren’t familiar with version-control systems (VCS), a git commit is simply a log or savepoint in any software project. Each log keeps a history of the things you’ve done so far, so that you can track them in the future. If there is a commit history of my Tuesday, it would look like this:

For software projects, They usually look like this (from my project, PySwarms):

The chart above shows how many logs I have done every single day for the past year. Greener boxes mean more commits, whereas gray boxes are zero commits. It’s not necessarily a measure of productivity, more of an approximation of one’s tech life.

In this post, I’d like to review my year in commits, then discuss in brief some lessons I’ve learned and challenges I’ll set for myself next year. I think, that as I end my Masters degree and transition into a new phase in life, it’s good to look back on the things I’ve done so far.

My year in commits: a review

First, let’s have a brief tour of my life in commits. I’ve included my commit history from January 2017 and added some annotations on significant life events during the past year: 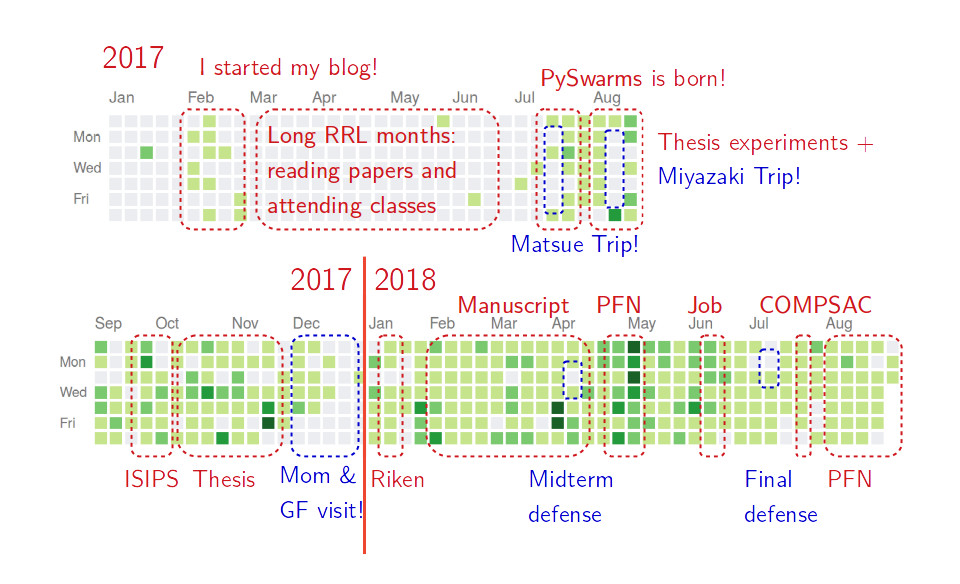 I realized that this commit graph covers a lot of things that happened during grad school. Going through all of them may be too much, so let me give you some highlights:

Overall, I think that I had a good year in programming and software. With PySwarms, it seems that I crossed an imaginary line from programming just to make things work into being aware of design patterns, idiomatic code, and software systems. The latter forced me to become more attuned to a software’s lifecycle and flow rather than just its logic.

I learned a lot, and realized that the tech world is really huge. Before, I thought that knowing Python (or any programming language) is enough. But there’s a whole world of software practices that I’m not aware of: continuous integration, deployment, testing, etc. New and exciting things to discover!

I still consider myself a newbie, and perhaps I’ll always be a newbie for the rest of my career in tech. Perhaps it would be nice to share some nuggets along the way.

As I’ve said before, I’m still starting out. I think I just got a lucky break in PySwarms, for it accelerated my learning—mostly by necessity. In this section, I’ll write down some lessons I’d bring as I go forward in this journey in software and tech. I may not be the most qualified person to give nuggets of wisdom, but hey, maybe you’ll find them useful:

Two more things: a certain philosophy that I’m practicing right now is to always learn the stack immediately below and above mine. There’s no need to become full-stack—as long as you can do your own thing with deep expertise, and you’re aware of the context of your field—you’re already fine. It’s difficult to learn everything, especially in a rapidly-growing field. Strive to do one thing extremely well, while understanding the peripheries in an intermediate capacity. With this in mind, you don’t run the risk of spreading yourself too thin nor becoming a one-trick pony.

For example: my current stack is in machine learning, then that means I need to learn how the data is being sourced (stack below me), and how my models can affect an organization’s decision (stack above me). I don’t need to fully-grok all management principles nor ETL techniques, but as long as I’m aware, and I can do them an intermediate person would, then I think I’m good. I can focus my energy in machine learning, but still aware of the larger context of what I’m doing.

Lastly, I learned from a year of seriously doing software is to treat it like a craft: there’s really no level where I can say, “I’ve mastered this.” Truth is, tech is a moving target: the techniques that I know today might be irrelevant tomorrow. Thus, the best way to set goals is to make short-term and lean achievements.

It’s weird to put one’s learning path in public, but maybe this would make me more accountable in the future. Here are some things that I want to learn in the short-to-medium term:

As a close, I think that doing this yearly review has helped me reflect on my journey in tech and software. Looking back, just one year of programming has provided me with new skills and perspectives. Now, tech has become more than just code—it’s design, community, and craft. As I transition to the next phase of my life, I’m excited to see what the next few years will bring.